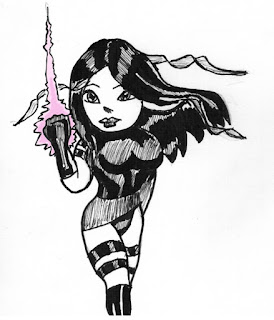 I wanted to do something a little different with the tiny heroes, and thought a good way to change things up would be to draw a tiny heroine. So far I've been drawing a lot of dudes from Marvel and DC. It's way past time for some girl power!

Psylocke has always been a favorite X-Person of mine. She has serious martial arts skills, her ability to focus her telepathic abilities into a "psychic knife" is...just...cool, and lest I forget to mention it, she's hot.

This is a character I would like to see treated really well in the books. Her use of telepathy is different from anyone else in all of the X-Books, and her seriously tormented background puts her somewhere in the Wolverine and Elektra range of psychologically broken. That could make for some really interesting conflict as she wrestles to come to terms with her past and tries to redefine who she wants to be. 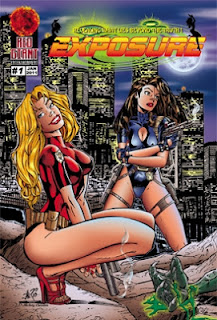 Issue: 1
Price: Free on Comixology. Who cares how much it actually costs. Don't pay money for this.
Recommendation: Take a pile of them out in a field and build a fire pit. Burn them. Bury the ashes. Salt the earth where they are buried so nothing more can grow from their cremated remains.

At some point I was flipping through the free titles on Comixology, which I do quite a bit as I can't wrap my head around paying print edition cover prices for a digital copy. When I stumbled across this comic I don't know what compelled me to click on it so I could see more, although it might have something to do with the cover art.

I suppose I figured I'd check it out, probably find a book that embodied all the things I can't stand about mature titles, then flip away and forget I'd ever seen the thing. On one level it didn't disappoint, but it also presented vampires in an intriguing way. My interest aroused...just my interest people...I downloaded and read the book. It took a half an hour of my life that I will never get back.

This book absolutely represents almost every element of mature reader comics that make me want to grab the creators and shake them until their brains rattle while screaming, "How dare you pollute the art I love!"

This is where a spoilers warning would go, but I really don't give a shit. I don't want anyone to buy this thing.

The book is so bad I feel like I have to start with something good to say about it. Some of the writing manages to be compelling. The big plot point driving the first issue is a compelling idea that Roman Centurions who were responsible for nailing Christ to his cross were cursed to become vampires by spilling the blood of a divine innocent. That's pretty compelling on its own, but the writing goes on to briefly flirt with brilliance in its explanation of the classic vampire vulnerabilities. They can be killed by wooden stakes, because that represents the wood on which Jesus was hung. They're burned by holy water because that represents Christ's tears. My personal favorite is the explanation offered by the book for a vampire's weakness at dawn, and strength at dusk. Christ died on the cross at dusk, then rose at dawn on the third day. And therein the compliments end.

The book's title is "Exposure," which is setting the correct expectations right there on the cover. The story revolves around two women, both working for the same police department. One is a medical examiner and the other detective. It seems like the creators were trying for Rizzoli & Isles with vampires. What they accomplish is presenting the comic adaptation of a Cinemax original horror movie called Hot Cops 2: Vampire Nuns.

Much of what I will grudgingly call the story centers around vampire attacks on a convent. The convent must be the Sacred Order of the Magdalene's Holy Ta-Tas because all of the sisters are insanely hot under their habits, with the exception of the mother superior. The presence of the nuns is then elevated to fetishism when the main characters don habits to blend in. Not only do they not get to finish dressing before the convent is attacked, but the habits are damaged in the battle so they're fighting in a catholic nun's version of a micro-mini that conveniently shows off their fishnets. That's not a typo. They're wearing fishnets under a nun's habit.

When the main characters do engage in battle it seems like they must have unbreakable skin or something equally implausible. Vampire attacks that tear full grown men in half do nothing to them but tear off their shirts. Not their bras, mind, just their shirts. Which begs the question; if your skin is invulnerable to harm, why do you need a bra made of Kevlar?

Easily the most offensive thing about the book is the casual way it treats violence against women. It's either pointless and gratuitous, or it's a speedy way to get the main characters' kit off. Whatever the reason it's bizarre and offensive in the way that it's fetishized.

Overall the one or two good things in this book are not remotely enough to balance its failings. Don't make the mistake I did reading this thing. There are a lot of creators putting out there putting out much worthier work. To be fair, it looks like Red Giant Entertainment, the publisher of this book, has a few titles that would be worth a look.

Whew. Got that off my chest. It's an important lesson I think. Not every book out there is going to be good. Now I'm going to go re-read Saga. After that I need something genuinely great to restore my faith in comic books as a storytelling medium.