Random thoughts
Things that are true are rarely ever uplifting. My wife and I talked about this after reading a t-shirt slogan. Think about it, even optimistic platitudes like "every silver lining has a dark cloud" aren't really all that uplifting. Fine! Great! There's a silver lining! Bully for the silver lining! You're still surrounded on all sides by a fucking dark cloud.

I can't believe this actually happened: http://goo.gl/iAadG
It's like RIM is actually trying to go out of business. Maybe under the right circumstances total failure as a business is more profitable to the guys at the top than being successful. Someone tell Mel Brooks these guys are stealing his moves.

Pacifism is a modern, first world point of view. Maybe it's because I'm reading Dies the Fire by S.M. Sterling, but it occurs to me that pacifism is an outgrowth of the rise of super powers and modern technology. Imagine a world without mass transit or mass communication, hell most people have trouble imagining a world with out fucking iTunes and Starbucks. In this world you eat only what you can grow or raise, or hunt on your own; at the very least you have to grow part of everything you eat. Those who can't, or won't, either starve or roam the land taking what they need to survive even if that means killing people. Who is really going to say "I respect your personhood" to the guy who wants to disembowel him for the world's last package of Skittles?

Whiteboard wise guys
As much as possible I try to stay far, far way from talking about work in this space. Once upon a time I wasn't so careful. That ended tragically. There was wailing and gnashing in the street. The worst was the gnashing. Every now and then, however, something happens that I think is worth sharing.

We have a number of walls with large whiteboard surfaces for use by our various teams. On one a company visionary wrote "the most important knowledge is the ability to anticipate the future," then proceeded to credit themselves for the quote.

The temptation to add to that, "Satirists quote themselves ironically, narcissists do so in earnest" and add my name to it is terrible. Not only does it have a funny ironic twist, but it's a nice poke in the eye of pretentiousness.

Today's (so very not) Daily Doodle: 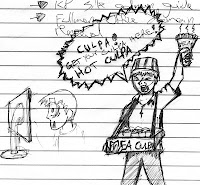 It's not just that I seem to be saying "mea culpa" at work a lot these days, but at some point the notion of a steaming cup of culpa popped into my head. Completely unbidden came the idea of a ballgame vendor walking the stands with piping hot paper packages of Culpa for five bucks. So while I was sitting in one of a seemingly endless series of sync meetings while the drone of business jargon and self-congratulatory rhetoric slowly liquefied my brain I drew a picture of just that. I wonder what Culpa would taste like. I like to think that it would almost have to be bitter.