Your Vote Counts, the final chapter

Vote tomorrow because it is the right thing to do, not so that you can use your vote as a way to shame others or to feel superior.

On the eve of the election I propose this: the choice we have to make is not black and white (so to speak). There are great divides in the ideology of the top major party candidates, and some would say that you have a basic choice to make between free-market-capitalism represented by Mitt Romney, or big-government socialism represented by Barack Obama. I don't think Romney is a good choice by any measure, but on this count specifically I suggest that it is possible to believe that one of the roles of government is providing services for the people such as a retirement guarantee or support for the elderly, health care, and public assistance for those who are struggling right now, and still maintain a thriving free-market based economy. I don't believe that providing a social safety net and capitalism need to be mutually exclusive.

Posted by basicrowan at 11:15 PM No comments:

Random Thought
Cross the goddamn street already
Los Angelenos I beg you, please, for the love of god, when you're crossing the street, please, walk like you have a fucking purpose. After work the other day I was driving to the Trader Joe's and had to turn onto Victory. The car in front of me, my car, and at least three cars behind me were held up almost to the point the light turned yellow while a family of four meandered across the street. They were obviously enraptured and taking in the awesome fucking grandeur of the intersection of Victory and Verdugo.

We see this all the time in Los Angeles. People just lazily ambling across the street like they're on some kind of fucking zen pilgrimage. Not so much in Denver. I think it has something to do with how cold it can get in winter. People walk like they're on a mission all year long because they've been conditioned to think "If I don't get out of this cold soon I"m going to freeze my dick (or tits) off." That conditioning never goes away. It could be the dead of summer and a guy wearing flip flops, shorts, and a Hawaiian shirt in ninety degree weather would still, at some level, be worried about frostbite on the fun stick.

The Matchbox Read My Mind
Two dear friends recently got married. At their wedding they had these adorable little matchboxes which had been wrapped with tiny children's book covers. We were sitting at the Fantastic Mr. Fox table, so that's what we got by default. In each little matchbox were a handful of refrigerator magnets. Between the two of us my wife and I could combine our magnets to come up with something meaningful, if abstract, but on our own they just didn't make sense (which is actually a kind of nice metaphor for our marriage).

Fast forward a week or two and I'm at a mutual friend's place with the newlyweds to watch a couple of scary movies and they brought a bag with extra matchboxes, so I snagged The Cat In the Hat and Clifford the Big Red Dog. I have to admit I forgot about them for several days until tonight when I happened to see them in my laptop case, fortunately none the worse for wear for my daughter using the laptop case as a trampoline (the laptop is ok, too; I'm using it to post this). I shook the magnets out of "Clifford" and what should fall into my hand but this? Truer words never tumbled out of a children's-book-matchbox. 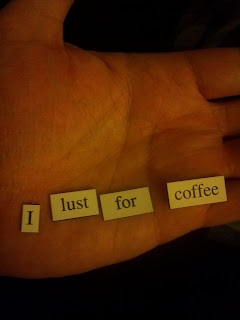 NaNoWriMo
I haven't done this in a while, but a part of me really wants to take on National Novel Writing Month again. Partly it's to get the creative juices going again. Partly it's an exercise in cathartic escapism that might prevent me from beating the shit out of some people who desperately deserve it. I see this as a win-win.

Joking aside I have not had an opportunity to really sit down and write for a long time. This is something I used to find genuinely rewarding and I need to do something to get back into it. Don't get me wrong, I love cartoons and cartooning, but my first and most enduring passion has always been writing.

It's always been the one thing I could do that set me apart from other people. In college when I decided to study acting I had professors who would say things to the effect of "You are a fine actor, but I really like your writing," or "it seems like you're almost a better writer than you are an actor." Maybe I should have seen the signs, like how you know your kid has been sniffing the dry-erase markers.

Basically I'm putting this out there to let those of you who read this know that I'm going to try it. I don't have high hopes for finishing. No one trying to write with a young child in the house is really likely to get very far unless they're J.K. Rowling level brilliant (or a lousy parent). That said I could use your support. Ask me how it's going. I'll post excerpts here. Tell me what you think. Tell me to keep going. I could use some good will. October was a lousy month. I'm still on my feet, but in the same way Rocky Balboa was on his feet after fifteen rounds of being tenderized by Apollo Creed.