Geek Speaking of Drawmelts and the Legend of Captain Sexy

This strip was interesting to put together. There was text in the last two panels, but after I had added it I looked at the strip again and realized the reactions I'd created for Mark and Steve sold the joke better than my actual joke. This is something of a first as I consider myself a writer first, and my natural inclination is to have dialog.

If I'm being really honest this is the result of watching Penny Arcade's series Strip Search. In the judging of elimination round five Jerry Holkins, the writer of Penny Arcade, points out that one of the strips created by someone who was up for elimination worked better with the text removed. That seems to have happened here. I liked my joke, but it didn't work as well as a couple of panels of straight up reaction shots.

It's fun to see Steve (the short bald one) and Mark (tall with lots of hair) utterly dumbstruck. Steve especially as he's the one who tends to run at the mouth.

The next time we see these characters I think I might play with their humanity a bit. We'll see.

Wow, so someone out there must really like me! Or my mom is checking my blog two hundred times a day from at least five different computers. That seems somewhat unlikely so I'm just going to be really excited that I've crossed the line into twelve-thousand page views! That means since the end of March/beginning of April when I started blogging like a computer-literate honey badger the traffic to my little corner of the Interwebs has more than tripled! That's awesome!

Monday was another evening at Meltdown Comics for Drawmelt. This has become something that I really look forward to doing once or twice a month. I don't have the time to do more than that, and I can't really afford to go more, but the time I get is more than worth it. The benefits of drawing from a life model are huge, and it seems like I'm getting better each time.

On the Monday the 20th I changed up what I had been doing and went to Drawmelt unaccompanied. I might not have gone on Monday, but as it happened the model they'd lined up a male model for the evening. For some reason it seems like the majority of the modeling done for these things is done by women, so this was a special enough opportunity I made the decision to head down on my own.

It is with an artist's professional detachment and pure aesthetic sense that I say, "holy crap this guy is good looking!" As I was drawing him I just kept thinking that his absolutely the leading-man hero type. He is also the first model I've seen who came to the event with a character in mind, and stayed in character throughout the entire evening. He was kind of Han Solo meets the Dread Pirate Roberts. Very Cool.

Here are a few of my favorite drawings from the evening.

This was one of the first from the evening. I had some fun adding word balloons to a few of drawings when the model was switching between poses. 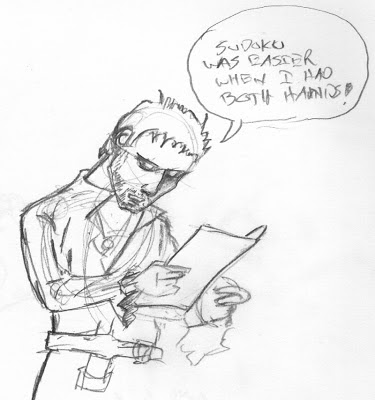 I thought I know what a smoldering look was...then Monday's model threw out a smolder that damn near toasted everyone's sketchbook. I bow to the superior smolder, and regret that I was only able to capture but a pale shadow of it here. 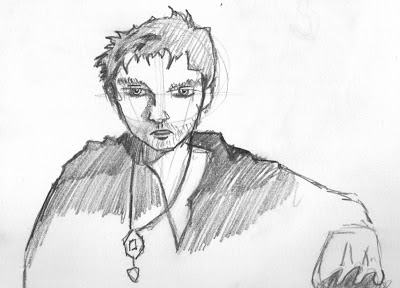 More fun with word balloons. Of all my drawings from the evening I think this one looks the most like the model. 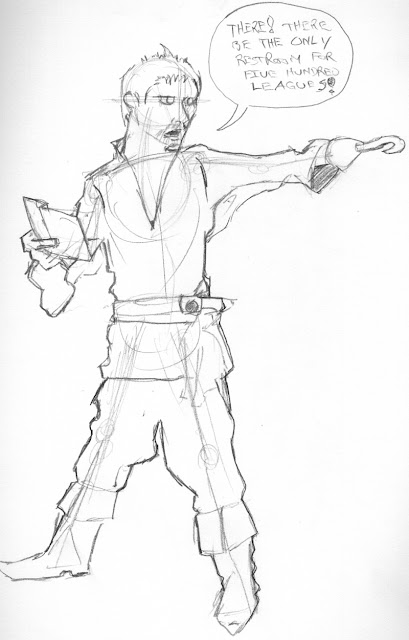