Whether she intended to or not Sam has taken Mark and Steve to a place from which they cannot return. The question remains, will they be better people for it?

My wife had a fair amount of input into these comics, particularly regarding my drawing of Sam's breasts. It's a testament to how awesome my wife is that her input wasn't, "you really shouldn't do that, some people might be really offended." She could have, and she would have been justified. Let's be honest, this puts a toe over the line of sexism. My wife could have made that argument and I would either have had to shelve this entire mini-arc, or find some way out of the corner I'd painted myself into. Instead what she said was, "Wow. She has a huge rack."

The guys' reaction in panel three is based on a doodle I did before bed a long time ago. I've been trying to find a way to work up to it ever since. I had a lot of fun drawing their reactions in panel three, and overall I'm pleased with the results.

One more strip with these three, I think, then we'll take a break from these characters for a bit. 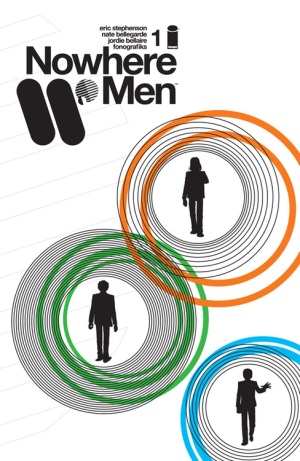 I'm going to start this review by saying this is a bold book. It deals unflinchingly with high-concept themes such as morality and ethics as they apply to scientific pursuit, human experimentation be conducted in secret, and the overreach of corporate ambition when it places profit above humanity. These are huge, huge ideas and they are handled well by the creative team of writer Eric Stephenson, artist Nate Bellegarde, and colorist Jordie Bellaire.

The beginning of the book is a kind of prelude to the story in the rest of the first issue. The book opens at some point in the past. Based on the clothing and hair we're led to believe it's in the late 70's or early 80's. This is followed by what looks like the curriculum vitae of the four characters on the first page a la Playboy interviews. This is a brilliant choice on the part of the creators as it lays out exactly who these men are without having to devote pages and pages to character development. This becomes important in very short order as we jump from "some time ago" to "years later" and the characters introduced on that first page are much older, and much has changed between them.

We meet them after a crisis moment in which one of their projects has taken a serious turn for the worst, resulting in the deaths of two men. How they respond to the tragedy sets up one of the major themes of the book. At the same time Stephenson deftly weaves in exposition that sets the stage for events later in the story.

Stephenson's writing is spot on. The arc of the book is carefully crafted to establish the tension early on, then leaves the reader on cliffhanger that is nothing less than out of this world. His dialogue is natural and each character speaks in a voice so distinct, so painstakingly well crafted, that you can very nearly hear what their voices would sound like if they could speak.

The artwork is equally well done. Each panel builds on the one before, and the team of Bellegarde and Bellaire have done an admirable job evoking the tension of Stephenson's words.  The line work is tight and, detailed, and disciplined. This tightly controlled quality makes it even more jarring when you're introduced to characters who've been subjected to the secret experimentation that is one of the books major themes. In a medium where the monstrous and spectacular are all but quotidian, it's a remarkable achievement when a creative team can shock the reader. Bellegarde and Bellaire do it, and make it look easy.

If I have a criticism it is that the same tightly controlled quality that makes it possible for Bellegarde and Bellaire to surprise the reader also makes the book feel as though they are holding back. Bellegarde is obviously a more-than-capable illustrator, but a large number of panels throughout the book offer only spartan detail. This adds impact to the big reveals in the book, but it also makes the world feel as though it lacks depth or substance. Almost like actors playing out a scene against flats painted in solid colors.

I'm somewhat guarded in my recommendation of this book partly because the last book I reviewed was Saga, a title that would skew the curve for anyone else, and partly because it seems like the creative team is holding back. Overall a very solid first issue, and I'll be picking up the other issues to see where this team is taking us.

Note: The cover image above is used without permission. If you would like to support the title or acquire a copy of the book please purchase it from the online comic store, Heavy Ink (linked from the image). Better yet, get out of the house and go to a local comic store and support them by picking up the print versions.