Random thought of the day
Life would be infinitely cooler if we could have a symbiotic relationship with a dragon. Be as one with a flying fire-breathing creature of ancient and powerful magic. That would be bad ass. It would also make my morning commute both faster, and several orders of magnitude more awesome.


Thirty something RAGE!
Just looked at the excellent BuzzFeed.com, and there's an entire page dedicated to tween morons tweeting "Who is Billy Crystal?"

The (not really) daily doodle 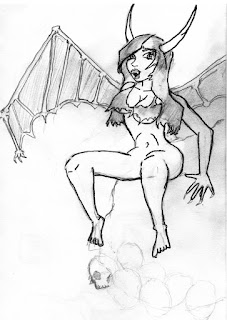 So...this is a succubus. She was ultimately supposed to be sitting on a pile of skulls, but I was drawing this at work (risky to begin with) and drawing a pile of skulls is A. difficult B. time consuming, it takes a log time to draw all those tiny details and C. did I mention that it's difficult?

As I look at this again I think I definitely need to stop drawing half-naked demon temptresses at work.
Posted by basicrowan at 11:39 PM 1 comment:

Lies our parents tell us: making good money
I don't know what everyone else's experience was growing up, but I remember being told on numerous occasions that I needed to work hard, get good grades, and go to school (meaning college) so that I could "make good money." Through all of my childhood, and into the early years of adulthood I associated "good money" with "lots of money." My life so far has taught me different.

When I entered the workforce I was in college, which is later than most. I started out as a waiter at Denny's, working the graveyard shift. When I talk about it now I sometimes sound like a soldier returning from war, "I saw things there I'll never forget," or, "when it's the dead of night and you're tired and your feet hurt and sleep seems a thousand years off, all you have is your resolve and your brothers and sisters in aprons." Let's dispel this myth right now, Denny's doesn't pay for shit, and working for tips is kind of like being a street walker with a Moons Over my Hammy.

While working at Denny's I thought if I could get away and start making just six or seven dollars an hour I'd be ok. I could make ends meet, maybe save a little, and I could buy some of the things I want. Well, not long after I left Denny's I started working for a company that paid me around six-fifty an hour to do tech support. While it was pretty cool to get a paycheck every week that had my name on it and around four or five-hundred dollars that belonged to me, I found pretty quickly that I hadn't discovered the elusive "good money." I remember thinking that if I could just get to eight dollars an hour I'd finally start breaking even. Not long after that I hit the high-water-mark I'd set for myself and it may surprise you to learn that I found it still wasn't "good money."

Things went in this vein for years; me thinking, "If only I could make ten dollars an hour," then it was, "if only I could get to twelve dollars an hour, then everything will be ok because I'll be making 'good money.'" As I got older and the jobs I took became more and more what are generally accepted as "real  jobs" the standard for good money changed from what I made per hour to what I make per year.

It started at twenty-eight-thousand per year. When I started I honestly remember thinking, "I'm finally making good money." It wasn't long before I learned how wrong that was. Over the years that calculation has changed from "thirty-five-thousand, that's all I really need," to "We'll be ok when I get to forty-thousand."

It wasn't that long ago that it occurred to me the whole concept of "making good money" might be bullshit. Money in and of itself is neither good or bad, it's just a means to an end. Someone making thirty-thousand dollars a year can still do many of the same things as someone making a hundred-thousand dollars. It just takes longer to budget for it, and there are more sacrifices along the way. Most people just don't have the patience for it, me among them.

I think the truth about good money is that money is just money, and it is only as good as the good you do with it. So what am I doing with my money? I'm raising my daughter. I'm trying to make sure that, when the time comes for her to be on her own she gets a better leg up on life than either my wife or I were given. In the end I don't think there's a greater gift you can give your children than a good start when it's time for them to go and be their own people; make their mark on the world.

No matter how much money we make, as long as my wife and I can say that we gave our daughter the best shot possible, then we can finally say, "yeah, we're making good money."

The (not really) daily doodle: Cute Little Baby Monster Who Will Kill Us All 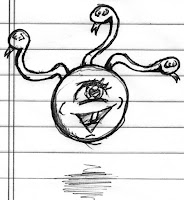 For almost twenty years now I've enjoyed fantasy role playing games as a hobby. One of the most terrifying monsters in all of fantasy role playing lore is the beholder of Dungeons and Dragons. These highly intelligent floating balls of gruesome death have a single central eye, and multiple eyes that extend from their blubbery, spherical bodies on muscular stalks. Each eye is imbued with a different way to kill even the most prepared of adventuring loonies. This doodle came about when I asked myself, "what does a baby beholder look like."

Lovecraft is not a good name for a town
One of my good friends recommended some comic titles I should read. In my lasts post I mentioned one of them, Skullkickers. Another of the titles he recommended was Locke & Key. In my bi-monthly comic book crawl through the local purveyor of books of sequential art I remembered his recommendation and picked up the first trade.

Sweet fancy Moses, this is a good book. The writer of the book, Joe Hill, weaves a tense and engaging story that would have you on the edge of your seat on its own. When coupled with the exceptional artwork of Gabrielle Rodriguez the story takes on a visceral life of its own. As the story unfolds and the tension mounts  you can find yourself checking the hallways and blind spots for fear that Sam Lesser, the story's chilling homicidal antagonist.

You would be forgiven for thinking the photo of Joe Hill on his Wikipedia page looks like a young Stephen King. His given name is Joseph Hillstrom King. He writes under the pseudonym for totally understandable reasons. After reading this first story arc of Locke & Key I feel as thought he inherited his father's sensibility when it comes to crafting stories around the plausibly disturbing. 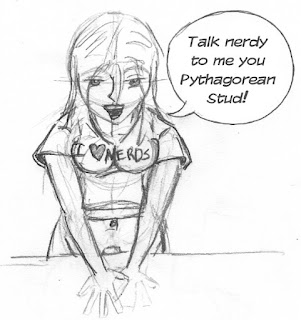 I was sitting in my acting class, waiting for my turn at the stage, when I noticed one of the ladies wearing a shirt that said "Talk Nerdy to Me!" She was not unattractive and, being a married man myself, I found myself thinking that some brave nerd would be a happy man indeed if he accepted the invitation brazenly emblazoned upon her bosom. If his head doesn't explode with the effort of talking (gasp) to a girl. Her shirt tickled another part of me entirely. Then I sneezed and thought a little about how to take the statement on her shirt to the next level. Thus was "Pythagorean stud" born!
You're welcome.
Posted by basicrowan at 11:45 PM No comments:

Random thought of the moment
Skull Kickers is awesome, and I recommend you read it. Also Fables. It's hard to describe exactly how good this series is. The first few books are an excellent read, and if such a thing is possible the story and the writing get better as you go. Recommended reading for almost anyone. Some of the content is really better suited for kids fourteen and over.

I'm the Dad
For those of you who know me really well, you will remember a time that I insisted I would never have a child, much less children. In the passionate rhetoric of youth I insisted that, should my resolve weaken, my wife and I would adopt, because the world is full of unwanted children (there are a few Angelina Jolie hasn't adopted yet) and it would be better to give one of them a home than to contribute to swelling the world's population. Years have a way of tempering passion into something far more valuable and enduring; perspective. My daughter was born in March and she has become a bright light in my world. With her I do things I never thought were possible for me to do, like pick another human being's nose and then call her cute.

I like to do drawings
So, I've been posting artwork to Facebook for a while, but they're a bunch of evil privacy violating, intellectual property stealing, fuckheads. It's getting to the point that I use Google+ because I don't want Mark Zuckerberg and the legion of Zuckernauts to sell my daughter's information to a phishing scheme that will run up credit card debt in her name just because I played the latest version of the Facebook municipal waste processing game. All of that said, the night that I write this I have also finished filling up a sketchbook with drawings. I would like to share some of those so I'll be posting them here as a daily feature. Some days it may be the only feature. What can I say, some days I have more to write than others. Here is your daily doodle. 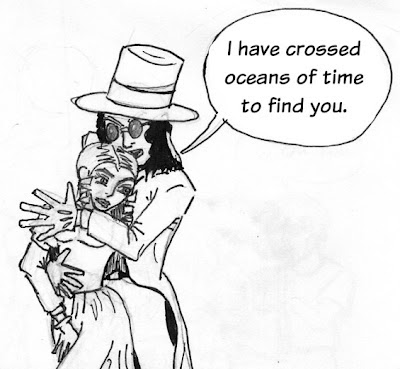 The first R-rated movie that I saw after turning seventeen was Bram Stoker's Dracula. It featured actors I knew, actors who were big at the time including Anthony Hopkins, whom I'd seen in The Silence of the Lambs; Gary Oldman, whom I had only seen in Rosencrantz & Guildenstern are Dead; and Wynona Ryder, whom I'd been crushing on since Beatle Juice. The experience of seeing this movie in the theater with my best friend who'd turned seventeen only the day before was a defining one for me. Not only did I feel like a grown-up for the first time, but it was one of those movies that made me want to make movies for a living. It helped to shape not just the kind of story I would like to tell, but the way in which I would like to tell it.

Truth be told, the movie has not aged well. I'm not sure which scrapes a sore spot on my nerves more; Keanu Reeves and Wynona Ryder doing possibly the worst British accents I have ever heard, Gary Oldman hamming it up in over the top villainous fashion, or the sense of camp that doesn't feel at all intentional. I can't help but watch Bram Stoker's Dracula now and think, "Tim Burton's Sleepy Hollow was scarier." Still, when I watch this movie I'm transported back to the Seven Hills 10 and I'm seventeen again, watching the movie with my childhood friends and feeling like a grown up for the first time. Also, the woman who played Lucy was fucking hot.
Posted by basicrowan at 12:00 AM 2 comments: