Geek Speaking Wonders and the Power of Audacity

Best quote I've heard in a while
"It's too early for sexy Pikachu."

Which was followed shortly thereafter by:

"It's never a good time for sexy Pikachu."

Geek Speak - The Force is...well if we're being honest, and I think honesty is best, The Force is fictional.

This is an older strip that I've had floating around my head for a long time. It's more-or-less self explanatory, but at some point I had the thought, "how awesome would it be if we could work using The Force." You'd just flex your hands a certain way and stare at the middle distance. Before you could say "Jedi" there'd be this swelling soundtrack and your keyboard would start hammering away on its own. That would be glorious, but I can't help thinking you'd end each day with the worst headache of your life. 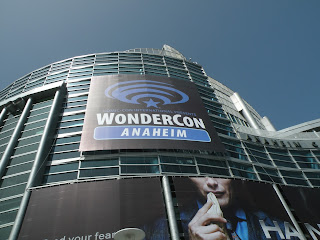 The Wonders of Con
This year I had the unbelievable good fortune of being able to attend WonderCon through my good friends Phoenix and her husband. To put this in the proper context it's necessary to understand that I am, at heart, a passionate comic book geek. There was a time in my life that no one in my group of friends new as much about comic books or, more broadly speaking, sequential art than me. As long as I have been interested in comic books I have wanted to go to ComicCon. The annual event in San Diego has long been my idea of Mecca. I've never been able to attend. One thing or another always prevented me from going until this year when I'm attending not just WonderCon, but ComicCon as well, through the generous gift of guest passes from friends who are registered as professional attendees.

WonderCon is not ComicCon. It's not as big, it doesn't have the big-money vendors like Sony or Warner Bros., and it doesn't get the media attention, but (and this is important) while it is smaller, it is substantially more focused on comic books and their creators. In this way, as a comic book convention, it's "purer" (for lack of a better word) than ComicCon.

I'll do another post on my Con experience, but I wanted to say something else here. The last several years have been incredibly trying and frustrating ones for me. Most of each day I spend in an environment that has turned gradually more stifling and pushed me into a mold for which I'm not the most natural fit. The extent to which this was causing me to be unhappy was something I was only dimly aware of until this weekend (it's important to note this is one aspect of my life, a big one, but there are other things in my day that actually make me very happy).

WonderCon thrust me into an environment where I was surrounded by people who share my interests, my passions, and around whom I'm not the oddball. In an epiphany that almost made me fall out of my chair I realized after the first day that, for the first time in several years, I was able to spend an entire day being myself.

That seems like an odd statement when taken out of context. To understand it you need to know that most days I work as a business and technology professional. I'm a project manager heading up a team of five software developers. Project management was not a role I had envisioned for myself, but fell into when the person who'd been hired by my company to be our "certified project manager" was unprepared for calls and causing clients to ask for another project management "resource" (in this business you are not a person, you are a 'resource'). The lack of leadership was so profound that I realized no one was going to take the lead if I didn't. Years later I was promoted to project manager to make the job I was already doing more official. To do my job every day I have to adopt the persona of someone who is a business and technology professional; someone who is not me.

I don't feel as though I am exaggerating much when I say at WonderCon I rediscovered who I really am. It almost feels like I turned a corner and ran into a version of myself from seven years ago who then tells me, "Hey there! Remember me? I'm here to remind you that you were once happy, and passionate, and engaged in things that mattered to you. You can have all that again." He then walks off, fading as he recedes into the distance, leaving me to ponder what he said.

If WonderCon has taught me anything it's that you can do the things your passionate about, even be successful at them (though there are many ways to measure "success") if you have the audacity to pursue them. I work hard already, so my work-ethic isn't a problem. I have a strong sense of my responsibilities and dedication to my obligations, so being responsible isn't a problem. I know when it's time to set play things aside and get to work, so discipline isn't a problem (well, not a huge problem, again, honesty is important). If I'm lacking anything, it's audacity; the daring to take a risk on doing something that fills my heart, even if it doesn't fill my bank account.

Maybe it's time for me to be a bit more audacious.
Posted by basicrowan at 1:07 AM 1 comment:

Geek Speak - A Game of Boobies
I haven't had much exposure to "A Game of Thrones," either on HBO or the books themselves. The few times that I have been around when someone was watching the series my eyes have almost fallen out of my head. It's like the show can't go five minutes without some gorgeous, large busted young woman getting out of her clothes and on top of some ruggedly handsome medieval dude. With all the talk about "winter" you'd think people would be more concerned about...I don't know...keeping warm, maybe? Anyway, that was the inspiration for today's cartoon. 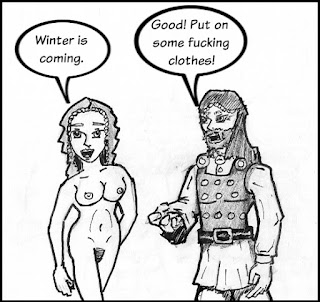 Random Thoughts
The downfall of our civilization won't be taxes, war, or the final season of The Simpsons. It will be the rise to power of a generation that uses the Internet chat acronym "LOL" in regular conversation...without irony.

Linux is like the weird kid next door. The disciples of Apple and the apostles of PC both look down on the Linux community as the kid sitting next to you in class who eats paste and colors outside the lines. In truth some version of Linux is used to run just about everything Windows and Mac don't. From your digital watch to your TV to your smartphone (even iOS was built on a Unix Kernel), everyone uses a device that depends on Linux every day. Linux has more market penetration than a Wall Street hooker.

This is from my recent attempt to complete the NaNoWriMo challenge. I didn't finish, but I didn't really expect that I would. I like the tone I've set here.


Rain had come to Uptown and a ripple of excitement ran through Undertown. At the first drops from above, the dwellers of Undertown stopped what they were doing and made for the nearest open space. Some stopped in the middle of haggling over the price of bruised, week-old apples, others fighting a brawl that no one could remember how it started stopped mid-punch and went out to the streets. Happy children ran away from their parents, to come skipping back at their shouted names. Those unable to get to the streets went to the tops of their buildings. Everyone, absolutely every man, woman, and child stopped where they were and turned their faces up.

The drops came slowly and unevenly at first as the ingenious rigging of pipes and bins high, high above their heads collected and distributed the water. When the pipes filled to a predetermined level, the rain began. The drops began to fall tentatively, then in a steady drone of water slapping the jigsaw mash-up of pavement and bare earth. Water striking their upturned faces, the residents of Undertown, rich and poor, brutish thug and bloodied victim, Fathers and daughters, raised their arms to feel the cool drops on their skin. As one they closed their eyes and dreamed of the sky.