So, this post has been a long time in coming. I looked back at my most recent post to see just how lax I've been in trying to create content for my tens of readers, and I was a little taken aback by how much time has passed. It really doesn't feel like it's been since May, but it has. It's been a busy three months, while at the same time I feel as though I've really done very little at all. Either way, here are some of the highlights.

Doctors, doctors, everywhere, and not a thing to treat

Let's not be alarmest, but I have been to see doctors more in the last six months than the last six years combined. I have more visits coming up, unfortunately, but hopefully getting to the end of this semi-regularly occurring health freak-out. The outcome from all of this, so far there is nothing wrong with me. An ultrasound found a little infiltrating fat on my pancreas, but that's a benign condition, and there's been more than a little talk about GERD (acid reflux disease). Mostly the talk has been about managing my anxiety, but otherwise I'm in good health. Like I said, more on this in a later post. I will be providing a comic to go with it.

Fathers day happened
Went out on Father's Day to see Captain America: Civil War and loved it. When I got home the family had made a bunch of cards and hidden them around the house for me to find. Later that night we had one of the three steak dinners I get each year. It was a great day.

My wife and I turned sixteen all over again...
...just without all the teenage mutant ninja drama and other bullshit that goes with actually being sixteen.

On July fifteenth my wife and I celebrated sixteen years of marriage. The time flies. It really does. I am lucky that for the last sixteen years (nineteen if you count the three years we dated) I have had someone very special with me on the out of control, full throttle, runaway train that is life. It is with Mildly Sensational that I do something really important, and that I might not do otherwise. It's with her that I can be still. It's with her that I slow down enough to actually make memories. She grounds me, even as she, and the family we've made, give me purpose.

I am not always the best at staying still. Even if it looks like I'm being quiet and still, I'm thinking about things I need to be doing, that I want to be doing, that I should be doing and that will probably cause me grief at some point in the foreseeable future, and it goes on like that. It is with Mildly Sensational that I can let some of that go, that I can start to undo some of the knots I've tied myself into during the day. She brings me peace, and with her I'm truly home.

Thank you, Mildly Sensational, for being my home. I love you.

While I don't have a completed comic strip ready to share, that does not mean I haven't been busily toiling over my sketchbook, painstaking producing achingly beautiful works of art for you, my handfuls of readers (hi, Mom!). Or, if I'm being less dramatic, here are some of my drawings presented in smaller art dumps while I get some comics put together.

Here's one that is fairly timely. Suicide Squad opened recently and re-introduced Harley to people who have been fans of the character for more than twenty years. While Margot Robbie looks great as Harley Quinn...she just isn't my Harley. Is it fair to her, or fair to what sounds like a great performance as a villain turned anti-hero in what otherwise sounds like a terrible movie? No. It's not fair to Ms. Robbie, but my Harley will always be Harley from Batman: the Animated Series. For the record, yes, I'm aware that, in the series, Harley wore a full body costume including the hat. I've drawn the full costume before. I took a bit of license drawing her this time. 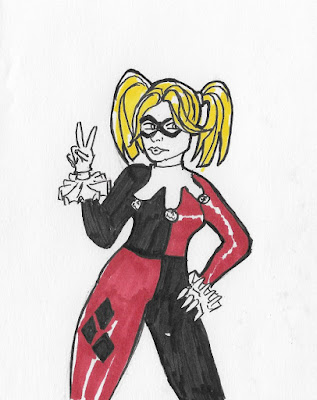 For the next nugget in my art dump, I bring you Shiro from the excellent Netflix series Voltron: Legendary Defender. The re-imagined Voltron manages to hit all the right nostalgia buttons, while turning in something that really improves on the original. Disagree with me? If you're nearing forty and reading this, go back and watch any cartoon from the eighties that you loved. I would be surprised if you made it through more than one or two episodes before you had to watch something else. They don't stand up, and, for the most part, they could all use an update. Voltron hits all the right notes blending action, comedy, and drama with genuine kid-level cartoon slapstick. Although I drew Shiro before anyone else, I think Hunk is my favorite character. The actor providing the voice nails it. 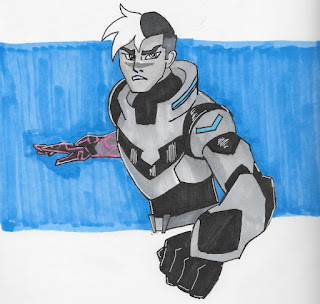 I am, for the most part, an Image and Marvel comics fan. I never really got into DC characters, mostly because Marvel characters are all human, at some level. DC's roster of characters is a who's - who of insufferable Mary Sues. For the most part it turns me off to their comics. The exception to that appears to be Green Lantern. Don't get me wrong, Hal Jordan is an insufferable douche, but there's something really compelling about a character who goes out into the universe to defend innocent billions who will never know about his sacrifice, and his only weapon is the power of will channeled through a ring. I was on board with that, and then they introduced the blue lanterns and rings powered by HOPE, and I couldn't stay away. It was fun here to imagine Elsa as a blue lantern. Here is a character for whom hope would be a survival trait. She has to have hope to imagine a better tomorrow for herself and her kingdom. I'll be doing Anna as a star sapphire at some point. 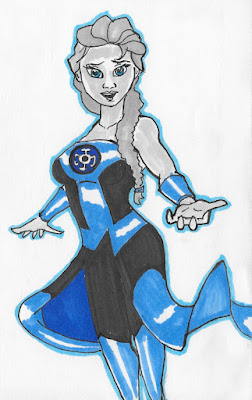 Lastly, I can't resist closing with a one-off joke comic. I drew this after doing a late night doodle of a Spider-Man cosplayer. I really like Spider-Man. It's not my favorite comic of all time (that distinction belongs to The Savage Dragon), but it's right up there. At almost forty, however, I think my days of jumping on the table in an ill-fitting Spidey mask and thwipping are almost over. If nothing else, it's something my kids could imitate, and we have a hard enough time telling them to stay off the coffee table as it is. 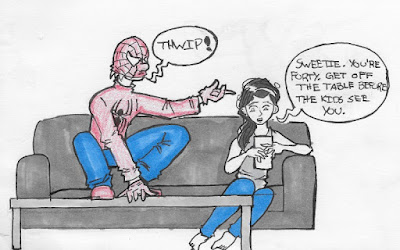 Posted by basicrowan at 1:00 AM No comments: