This is the United States. We can do better.
Posted by basicrowan at 11:34 PM No comments:

This started as an email to my sister but started running way too long to send her the thing in its entirety, so I decided to put it here. I don't usually like to do this, mostly because it opens me up to smug condescension from people on the conservative side of the spectrum. I decided to go ahead with this because I think this is important and there needs to be an honest, hard look at the candidates. It's wonky and long, and I apologize. I hope that after the election I'll get back to writing about comic books and drawing cartoons.

You on the other hand, and the other voters in Colorado, could actually affect the outcome of the race. Not as much as...you know...Ohio...but more so than California.

That said, I have to follow it up with this, I don't understand why anyone who didn't drink an entire bottle of NyQuil before going to the polls would vote for Romney. Here are a few of my general thoughts about the GOP candidate:
Those are kind of personal objections to Romney. The next points are all policy.
Romney dancing on the graves of our honored dead 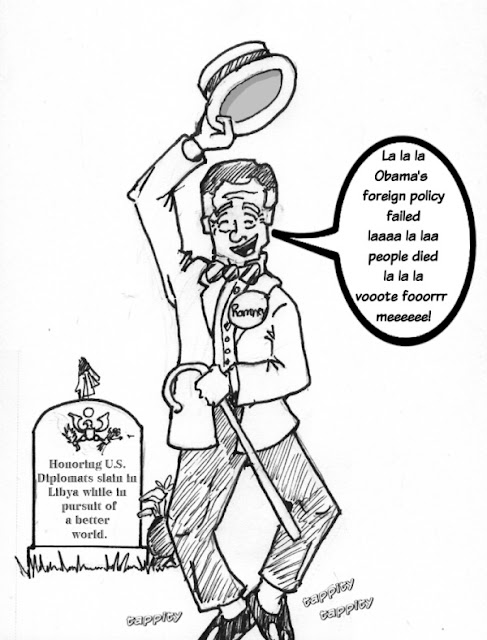 Posted by basicrowan at 11:30 PM No comments: