Today's strip brings back Sam, Mark, and Steve. I'm continuing with the idea that Mark and Steve are completely clueless regarding Sam's gender. To them she's just one of the guys because they simply don't know any better.

In a way any guy over the age of eighteen can probably relate to Mark and Steve in the first panel. All boys go through a seriously awkward phase right around the time we hit puberty and start to notice girls. This is the beginning of the "hormonal idiot" phase of growing up and it lasts until you're about twenty five. At the beginning of that phase it's incredibly common for boys to brag and tell tall tales about their exploits and all the boobies they've seen, which is usually an outright fabrication, or he may have caught a glimpse of an older cousin while she was changing clothes. In any event, the game is to make yourself sound more grown up and manlier on the basis of all the unclothed mammaries you've ogled.

It's a stupid game, but every guy you know played it at some point early in that hormonal idiot phase.

That's what it's like. Guys get between ten and twelve years of being cute, then about thirteen years of being a complete fuckwit, then most of us wake up one morning with gray hairs on our head and hair growing out of our nose, and suddenly it's time to get serious. In the case of Mark and Steve they haven't had that moment of epiphany yet. They haven't had that moment where they realize it's time to stop talking about women as though they are simply a life support system for their breasts.

Their moment is coming. 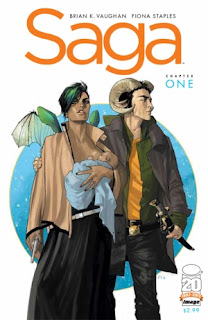 Publisher: Image Comics
Issue: 1
Price: $2.99 (cover price) $2.39 (price on Heavyink.com, thought it's not currently available for order) $0.00 (that means free, cupcake, and it's what you'll pay if you get the digital edition from Comixology).
Recommendation: Holy crap this book is good. If you can find it in print, pay real money for it and support the creators. If you can't find it (which is likely, this book is crazy popular) go ahead and pick it up from comixology while it's still free.

Disclaimers out of the way I can begin glowing about the world coming to life in the words of Brian K. Vaughn (Y, the Last Man) and the images of Fiona Staples (Trick R Treat). The story has a narrator who comments on the action, guides the reader through the events, and provides some of the necessary exposition. In most books with a third-person-omniscient narrator the narration is clunky and forced and consigned to text boxes that break the look of the panels. Not so with Saga the voice of the narrator is woven into the images, linking in inextricably with the events, which makes sense when you learn the identity of the narrator. I won't reveal that here. Part of the fun is finding out who it is.

Vaughn and Staples don't waste any time dropping the reader into the action, starting the story out by placing the reader in one of the most intense and visceral moments everyone faces sooner or later. The story is well orchestrated and those first tense moments are followed by a tender interlude, which is interrupted thereby initiating the conflict that will drive most of the rest of the book.

The story is complex, introducing a rich environment and crafting a world where magic and technology exist side by side. A number of characters and stories are introduced, and events are set in motion that will ultimately lead to the different narratives intersecting at some point.

All of the characters are given a distinct voice and attitude by Vaughn who crafts dialog and narrative with skillful precision. Vaughn's story is well paced with moments that alternately amuse, frighten, and put the reader on the edge of their seat.

Staples artwork is a great compliment to the words and story provided by Vaughn. The panels are well composed and the pages laid out so the story flows. Staples has also clearly had fun with character concepts and designs. The discovery of the different character designs is part o the fun of reading the book, and is reminiscent of watching the original Star Wars trilogy, especially Episodes IV and V. The first time watching the movies you never knew what amazing thing you were going to see from moment to moment, even on repeat viewings there was always some new, cool character you hadn't seen before. Staples work has that same joy of discovery.

In reading this as a title for mature readers, I really appreciated something Vaughn and Staples have done. While I would never dream of giving this to any reader under the age of fourteen or fifteen (basically anyone so young they wouldn't understand it or they'd find it confusing) it doesn't fall into some of the traps of other "mature" titles.

Saga includes some very adult subject matter including violence and sexuality, but it deals with these subjects in a way that is "real" and never strays into the gratuitous or puerile. I hate reading books intended for "mature" readers where the dialog is stuffed with obscenity and the pages are filled with egregious, over-the-top sex, violence, and gore. Books like that degrade the subject and the reader.

Saga rises above that. In many ways it's like a well-crafted, R-rated movie in print form. I feel very comfortable recommending this book, and I intend to keep up with it.

Note: The cover image above is used without permission. If you would like to support the title or acquire a copy of the book please purchase it from the online comic store, Heavy Ink (linked from the image). Better yet, get out of the house and go to a local comic store and support them by picking up the print versions.
Posted by basicrowan at 12:02 AM