Confessions of a Rock and Roll Pariah and some Speaking Geeks

I am a Rock and Roll Pariah:
There's no one reason I could point to and say, "that's it, that's why I hate the guy," but David Lee Roth really bugs the shit out of me. He makes me want to change the radio station. This means that any Van Halen song that comes on the radio with Diamond Dave as lead singer automatically gets turned to something else, while any Van Halen song featuring Sammy Hagar's pipes gets turned up. I have the same problem with Breaking Benjamin. Anytime they come up in my Pandora station I hit the skip button. No good reason, I just do. In some circles I believe this makes me a Rock Pariah*, a wandering outcast in the golden land of sweet riffs and face-melting solos. Shunned by the rock elite who dismiss Van Hagar and sing "Free Bird" around bonfires built of Nickleback albums.

*It probably cements my status as a rock Pariah to admit that I actually really like this song. I just think it's fun.

Terminology I can do without
I really wish people would stop referring to PowerPoint Presentations as 'decks.' You can't shuffle it, and some lowly sailor isn't going to come by with a mop to clean it up. It's a presentation. Please leave the officious corporatese at home. No one is impressed. Oh, I'm sorry, you have an MBA? How foolish of me, you are special. Here's your cookie.

This week's comics
This week we take a look at three new (or new-ish) comics. One of which I don't particularly care for, one for which I have mixed feelings, and another that I feel confident in recommending. The comics this week are Greek Street #1, Escape from Wonderland #4, and Zen #1. 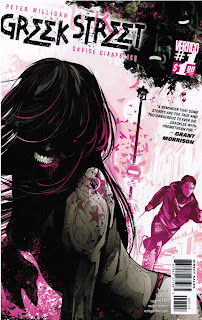 I want to go on record as saying that I had high hopes for this book. Legendary Greek stories and characters retold against the backdrop of a gritty urban landscape. This has been done well in other works, with other mythological figures, like Neil Gaiman's outstanding book American Gods, or John Updike's classic The Centaur. Sadly, the creators responsible for Greek Street have neither the literary gravitas, nor the cleverness of either Updike or Gaiman. In fact, the only really positive thing I can say about this comic, is that it only cost me a buck.

This statement hardly needs justification beyond explaining that the first panel of the first page is topless strippers in mid-gyration. What follows shortly after is some intensely expository and overly melodramatic dialog about the old stories which, "aren't through with us yet." You can practically hear Andrew Lloyd Webber warming up the hard rock symphony to score the scene. At which point we are introduced to 'Eddie,' a street thug who is ultimately seduced by a woman who turns out to be his mother, and who he accidentally kills in a struggle. Eddie...Oedipus...get it? Things do not get better.

I find this book offensive on many levels. Aside from the obvious misogyny it leaps enthusiastically into the same trap most other books designated 'for mature readers' struggle to avoid. Namely, it is an excuse for excessive foul language, nudity, violence, nudity, shock value, and nudity. The book is trying so hard to be hardcore that it utterly fails to tell a story, much less entertain. 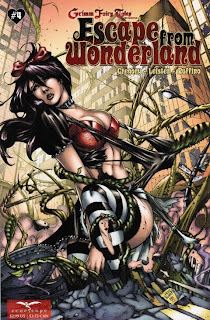 I'm reminded of an iconic comic book villain who's big screen counterpart once said, "I don't know if it's art, but I like it." Honestly, I'm not too sure about that second part, either. My opinions are mixed on this book. It falls into some of the same traps as Greek Street in that it's story uses characters from a classical work. As a result, some of the character concepts seem a little forced, like the main character who's name is "Calie," which is an anagram of 'Alice.' Like Greek Street there are some moments that reek sex for the sake of a puerile thrill.

Where this book succeeds is in not attempting a straight retelling of the story of Alice in Wonderland with awkwardly bolted on urban grit and profanity. Instead the creators use recognizable characters in a familiar setting and mold a unique story around them. The tone of Escape from Wonderland is more frightening than you might expect from a story based on what is generally considered a children's book. This issue in particular has some genuinely creepy moments, and some gruesome images. These moments are accomplished with a genuine flair, and obvious passion, for the horror device of adding something macabre to an ordinary setting. In one such scene, Calie's mom brings in the groceries, and in the next panel intestines have burst through the blood-soaked bottoms of the paper bags. Though this issue comes at the end of a much longer body of work, making up a trilogy of stories, the degree to which the characters are fully developed, with clearly defined relationships is impressive. In the end this book accomplishes what the first issue of Greek Street failed to do; it makes me want to read the rest of the story to see how it ends. 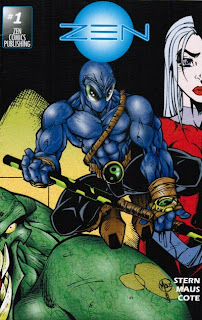 I feel like putting this book in with the other two is a little unfair. Kind of like a pit fight featuring a frail, elderly cat with one tooth, a fit but slightly dumb pit bull, and a tiger armed with a fifty-caliber machine gun.

Anywhere the previous two books are weak, this book is strong. The plot of the book features several interconnected stories, with each story is told from the perspective of a different main character. Central characters to each of the stories fall under the heading of protagonist, antagonist, and undecided. All of the characters have well developed personalities and their own unique point of view. The characters also have clearly defined relationships, making the book as a whole a strong, character driven narrative.

The illustration is somewhat less realistic than the other two, but this doesn't impact the appeal of the book in any way. Instead, it appears to be a conscious decision on the part of the creators to go with a more-cartoony, slightly over-the-top artistic style. This gives the book a cinematic flow and feel that would affect the reader differently with more realistically rendered artwork. I strongly recommend this book as one that is as fun to read as it is to look at.

Geek Speak
I don't think a lengthy explanation of this cartoon is really needed. If only shaking the pencil could actually dislodge creativity, and cause it to flow effortlessly from my hand onto the page. Alas, inspiration is a fickle mistress, and she has too many lovers to devote much time to any one of them. It's probably fair to assume that anyone who endeavors to make others laugh with a few carefully chosen words feels like this from time to time. Oh well, back to trying to dislodge some funny.

Posted by basicrowan at 11:18 PM No comments:

To those following my blog. There is a new post coming. I swear. I'm not lying to you. See...this is my honest face. I don't really have a good excuse for how long it's taking me to put out the new one, except that I'm working slowly. Like a turtle on a keyboard. 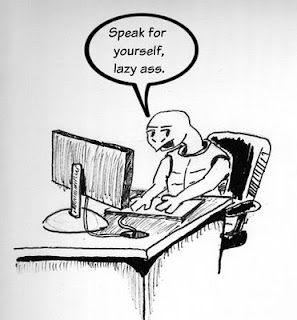