Rock Gods with Day Jobs bring the house down with an acoustic accompaniment to Szechuan cuisine. 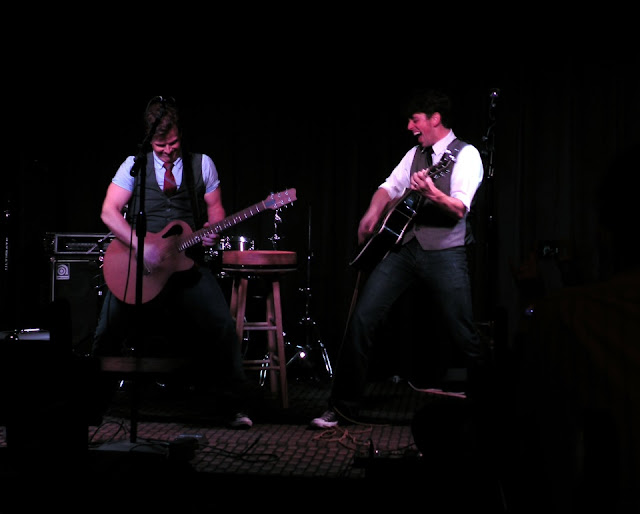 Quinn's Uncles is a rock duo composed of brothers Jim and Tim Meade. Their music is chiefly acoustic rock that ranges from energetic numbers that will have you bouncing and rocking out in your seat, to ballads such as "Quicksand" that seem to have been wrought from raw materials drawn up from some deep emotional place, which reaches out through the guitars and voices of the Meade brothers to wrench at your own emotional vulnerabilities.

I was first introduced to Quinn's Uncles by Jim when he appeared as Don Pedro in a production of Much Ado about Nothing that I was directing. After hearing him sing bits and pieces of songs from what was at the time their latest album, Meadevil, I picked up the album. It immediately began to get heavy rotation in my car's CD player, and I belted out all the lyrics to "Say Uncle" and "Hot Monkey Love" using the imperfect instrument that is my own voice (it's better now that I've spent two years singing to a tiny human who shares my last name and some of my genetic material). 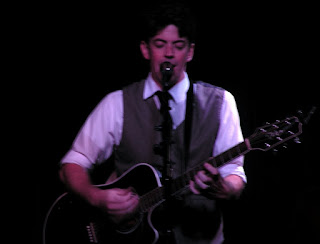 The first time the opportunity presented itself to see Jim play live with his brother Tim, I jumped at it. Mildly Sensational and I made the trip into Hollywood to meet up with a friend who works with Jim at his day job (the subtitle isn't me being clever, he really is a "rock god with a day job"). The show was in the back room of the Pig 'n Whistle, a cozy events room with its own full bar.

Before Quinn's Uncles took the stage I was unsure what to expect, I'd been listening to the album, and I'd really enjoyed it, but with a live performance there's always the risk of discovering the band who sounds great on the album is largely the product of extensive studio engineering. It was a genuine pleasure to find this was not the case.

Tim sings and plays lead guitar, Jim also sings and plays rhythm. They switch vocals depending on the song, which works as both are accomplished singers, and their voices blend, pardon the choice of words, harmoniously. The album featured drums and some other instrumentation, and the live show was the two of them with their guitars. I didn't miss the other instrumentation as their performance was electric and I left the Pig 'n Whistle that night humming and smiling.

On Saturday Quinn's Uncles played the music room at Genghis Cohen, and rocked it. Admittedly I was running late and came in partway through the first or second song of a forty-five minute set, but the disappointment of possibly missing the opening number left quickly as I was introduced to a song I hadn't heard before. From there they took the audience, near the sixty-seat capacity of the Genghis Cohen music room, through a selection of their songs from three albums. 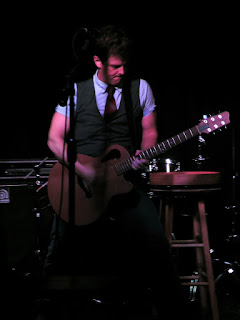 Tim and Jim are consummate entertainers, as comfortable talking and joking with the audience as they are
playing their guitars and singing. Between sets they would banter with a charming brand of self-deprecating humor that pulls the audience, ever so briefly, into the brother dynamic they share. The audience is not left to passive participation in the show, as the Meade Brothers invited the audience to sing along with a couple of their more well known songs including "Let Me Down Easy" off of their sophomore album, Meadevil. In both cases the audience participated enthusiastically, singing and clapping along and both songs ended with the largest and most heartfelt applause of the evening.

The evening ended with their rock ballad "Exclusively" given a heartfelt performance by Jim, and wrapped up in true rocker fashion with a scorching guitar solo performed by Tim. The end of the show was a bittersweet moment, full of the infectious joy the brothers devote to their performance, but sorry to have it ended. Even so, I'm sure I wasn't the only one to leave last night humming my favorite tune from the evening. I am just as likely not the only who will be putting Quinn's Uncles back into heavy rotation on the car stereo to drive the streets of L.A. belting all the lyrics from their latest album with my own imperfect vocal instrument.
Posted by basicrowan at 11:17 PM